As planned, I went to school Sports Day in my extended lunch hour from work and I am so pleased that I did. I was sitting with some other Mums of Senior pupils, when most of  6th form arrived outside. I watched Joshua lead his TAs a merry dance and then I went over to say hello. I was rewarded with a big smile and hug and then we looked at the stalls that various classes had organised. I bought Joshua some freshly squeezed orange juice and a cup cake with wine gums on top, but he rejected both, so I drank the juice and ate the sweets off the top of the bun. I went to sit back down with the parents as he  wandered around, taking in the scene.

I was busy talking, when one of the Mums shouted out ” Look 6th form are running a race!”. Sure enough, Joshua was coming up the race track with a TA either side of him for support. So I leapt up cheering and then went to the finish line, to encourage him to run towards me. I was delighted as I had been told that there would not be any 6th form races. Joshua looked bewildered at the end of the race, which I think he probably came last in, wondering what that exertion had been all about. We had more hugs and he went back to the start at the other end again. Soon he was to be seen running the egg and spoon race too: he threw his egg and spoon away halfway along the track but he made it to the finish line again, where we had some photographs.

Sports Day was  really well attended by parents and families and it was a sunny afternoon too. The second surprise of the afternoon was an interval with an ice cream van on the playground. Both pupils and parents were queuing around the corner for a 99 or an ice lolly, which was a perfect treat on the hot summers day. The races resumed after the interval but sadly I had to leave and Joshua was getting rather hot in the sun, so he returned upstairs where he could safely remove his hot boots and helmet.

Sports Day exceeded my expectations and , for whatever reason, I am delighted that Joshua and his peers joined in more than any previous year that I have attended. I have never understood why 6th form were not previously involved, so this development made my day and the young people seemed to enjoy it too. In my morning blog, I had simply hoped for “a glimpse” of Joshua, but I was rewarded with much more than that. 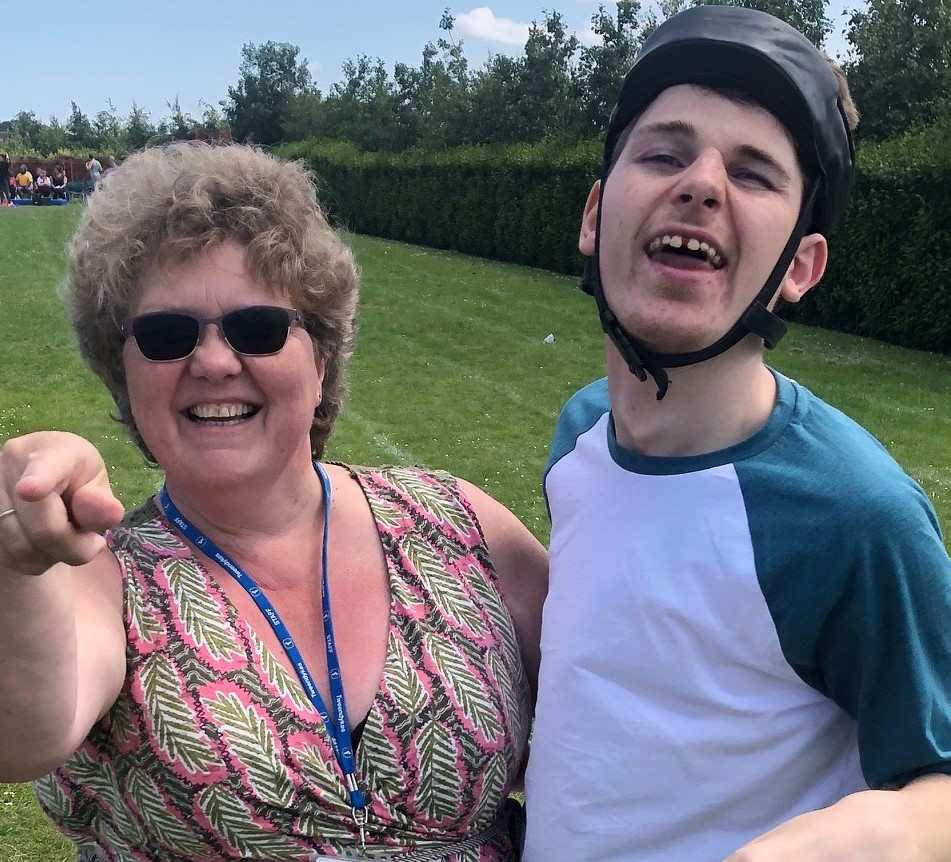