Just because you know something is going to happen, that you are going to lose something because it is getting older, it does not make it any easier to bear. Until yesterday we were a six dog family, but last night we lost the oldest member of our canine pack, when almost 15 year old Max died. He has been getting slower in more recent months : his back legs kept giving way ,as this is a weakness in the German shepherd breed, and he was very deaf, but as the alpha male of his litter, we simply assumed that he would last forever. He tolerated the new puppies  in our household and looked on like an elderly Grandpa, growling at them if they played too close to him and he had their respect.

My husband will dig a grave for his beloved Max this morning, so he will have his final resting place in our garden alongside his two brothers and his mother. This is the harsh reality of loving a dog, they simply do not live long enough and in our married life, we have buried too many loyal companions. As the puppies are starting their life, they had their inoculations yesterday, Max was ending his. I was midwife to Max and his siblings, so he started his days in this house and he ended them here too. Before they had names, we called him ‘brown boy, brown face’ to distinguish him from his siblings and he was always the pack leader, first to do everything. My husband was devastated when he went away with a couple as they chose him and his sister from the litter, but 18 months later he came back to us and that time, he was not letting him go and we have been truly blesses by his presence in our family

So my advice to my nieces, who are each having one of Ruby’s pups, is to enjoy everyday with them, because too soon, they are gone. There is no protection against this heartache, as they become part of your family so the sense of loss is very real. We were sharing good memories of Max last night and they were so many happy walks and holidays to remember, from the days when he had endless energy and his Mum’s stubborn spirit. If the calculation about dog years being like 7 human years, then Max was in his 90’s when he walked the Dalesway over a five day period with my husband – he was clever enough to conserve his energy once he worked out that this was not any ordinary stroll, and he slept from the minute he arrived in their accommodation, until breakfast time to re-build his strength ready for the next day’s exploits. He had a wise, knowing look in his eyes as he grew older, as though he had seen and heard everything before, so he even took the arrival of Ruby’s puppies in his stride. 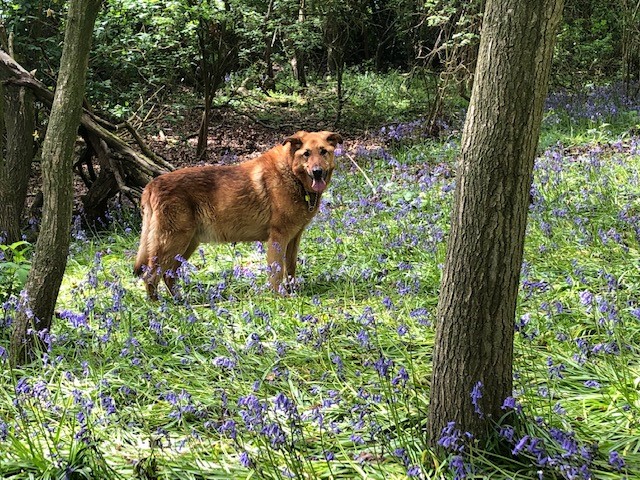