Joshua came with us to a country show yesterday, which is really our idea of fun rather than his, although there are parts of the experience that he enjoys. He has not come with us for the last few years as his respite weekend has always coincided with August Bank Holiday weekend and I am sure that he has not missed it much. But this weekend he has come away with us so he came along to the show. Previously he has been in his wheelchair but the new -walking everywhere Joshua strode in amongst the cattle, holding our hands. But it was not long before he wanted to sit down and as it was lunchtime and we had passes for the Members Enclosure , we walked there where he could sit down and watch events in the show ring too.

It was a hot day and he grabbed at someone else’s bottle indicating that he was thirsty so my husband went to buy him some juice. It was served in those flimsy plastic cups which he squeezes too hard, so he went back to find a better container for him. He returned with a bottle of water and a champagne flute made out of solid plastic which he rejected, in favour of the original cup. He ate a bag of crisps, rejecting his ham sandwich, while everyone else enjoyed salad and pudding. His Dad went to buy him a portion of chips to tempt him but he was bad tempered while he waited, smacking me and throwing my iPad onto the ground. He picked at the fries when they arrived, but not with his usual gusto and then it became clear the reason  why….

Joshua bent double in his chair and had seizure after seizure. My husband lowered him onto the rug on the ground while I timed his seizures and tried to reassure him. Once they were still coming strongly after 8 minutes, I gave him his rescue medication and it seemed to work almost immediately, as I could see him relax. But we knew his afternoon was over, as within five minutes he was fast asleep on the rug – he even let me rub sun-cream into his face, which illustrates just how deeply he slept. I stood over him, creating a shadow, while he slept, while the others looked around the show and then later, I took my turn. Joshua did not wake until the end of the show at 5 pm and even then he was very wobbly with his walking back to the car.

We had a nice day out in the sun and I particularly enjoyed watching the terrier racing, which our Kevin had a go at, but it was not the day that I had envisaged, thanks to epilepsy. 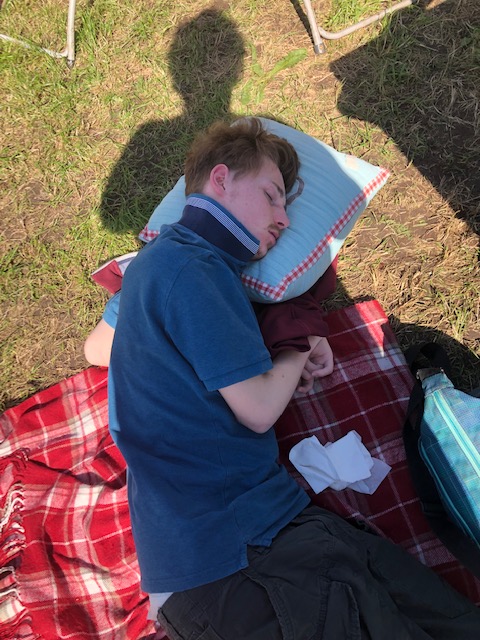